Shame and addiction often play a role with substance use disorders.

Understanding substance use disorders lead to several questions. One of the questions that people struggle with when they are trying to understand addiction is why people “keep using when they know it’s so bad for you.” This is a fair question, especially if you have not personally struggled with compulsive behavior yourself. Many, if not most, people who struggle with substance use disorders (SUDs) have had issues in childhood and also experienced consequences that are embarrassing if not self defeating. These experiences we may call “shameful.” This is important because, in many ways, a large driver of relapse for people with SUDs is shame. Addiction is a biopsychosocial disease, and elsewhere we have detailed some of the biological and social issues that sustain SUDs. Here, let’s talk about shame and how it plays a role in maintaining problem behavior.

Shame and Guilt are most common feelings, but what is the difference?

It’s often confusing for people what kind of internal “bad feeling” means what. Here, let’s break down two common feelings people experience when the engage in maladaptive (i.e., causing problems) behaviors. Guilt and shame are the most common feelings associated with SUDs, sometimes erroneously used synonymously. Guilt is the subjective experience of anxiety or psychological pain for having engaged in a behavior that you believe is incongruent with your values. Example: person believes that stealing is wrong, and when they steal they are worried and/or feel “bad” for the behavior they did. Notice the emphasis is on the behavior. Shame, on the other hand, is a typically toxic internal state, which is when a person engages in a behavior, regardless of moral value violation, and perceives themselves to be “bad” and typically have some subjective sense of wanting to hide or avoid people. Example: person believes that they are “less than” or “unworthy” for their sexual orientation, and avoids “coming out” due to their internal sense of being “broken.”

Shame and guilt are both highly unpleasant feelings. Guilt is typically productive if it is understood appropriately and used as motivation for behavior change. Shame, on the other hand, often leads to further maladaptive behavior due to the self-reinforcing nature that if “I am bad, I therefore deserve bad outcomes,” which sets the individual up to ignore their values and act on emotional states to avoid feeling shame…perhaps by using substances to numb the painful sense of “I am bad” or “I am less than.” This brings us to how shame holds people back from staying sober.

Many people who struggles with SUDs have a very strong sense of shame before they even struggled with drugs. Often, after years of failing to stop using drugs, people internalize a sense of powerlessness and “badness.” Society does not typically look kindly on “addicts,” and families and/or romantic partners often are beyond frustrated with their loved ones struggling with a SUD. People needing treatment for a SUD often feel profoundly unimportant, even despite people doing their best to show they care. When consequences happen or a relapse happens, this is typically the start of a painful cycle that (see below) that needs to be addressed in order to prevent future relapse. 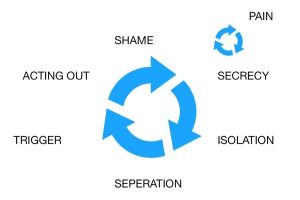 Here’s how the cycle works. Person engages in a maladaptive behavior, or is reflecting on something internally (ex. Memory). This internal sense of shame associated with what just happen leads to a desire to be secretive, which then leads to subtle forms of isolation like being less talkative or less honest with people who care. As they interpersonally isolate they also begin to physically separate, such as spending less time with people or being less intimate with friends/lovers. As they shame and stress of isolation builds the person may get “triggered” or experience other stressors that prompt a desire to use drugs to cope. When the stress and/or shame has reached its breaking point (unique for each individual), the person eventual acts out (i.e., uses a maladaptive behavior to relieve the internal stress/shame, such as drugs), and they immediately feel shame…starting the cycle all over again.

This cycle is toxic and can hurt people. Many times people never address their shame in treatment because they are unaware or feel too unsafe or unworthy to share their secret pain. This is why it’s important to have knowledgeable and caring professionals, who understand how this shame cycle works to address the intense pain and profound sense of “badness” many have when struggling with SUDs. There is no need to try to manage shame alone. If you have any questions about treatment please feel free to reach out to us anytime at 747-222-7464 or at https://www.pcicenters.com/contact/

Get PCI To Reach You